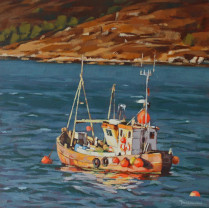 Ken MacLennan was born in the crofting village of Badluarach in Ross-shire. After moving to Dingwall he went on to study drawing and painting at Edinburgh College of Art. He entered the teaching profession after leaving Moray House College of Education. Ken has worked in Edinburgh, Dunfermline and Plockton and until recently was Principal Teacher of Art & Design at Milne’s High School in Fochabers.

He has now retired to paint full-time from his home in Fochabers.

Ken paints landscapes and seascapes around Scotland, often the Moray coast and more recently the West coast of Ross-shire.
Initially his work focused on structure and form but this has developed into a study of the drama of light and atmosphere of a particular study. Colour hues and values are investigated and expressed in an energetic and painterly manner.

Throughout the work there is an emphasis on draughtsmanship, composition and an attempt to convey a mood or feeling of a particular scene.

No work currently in stock. 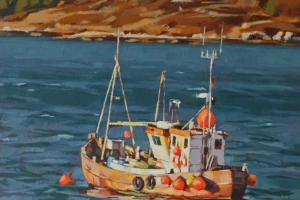